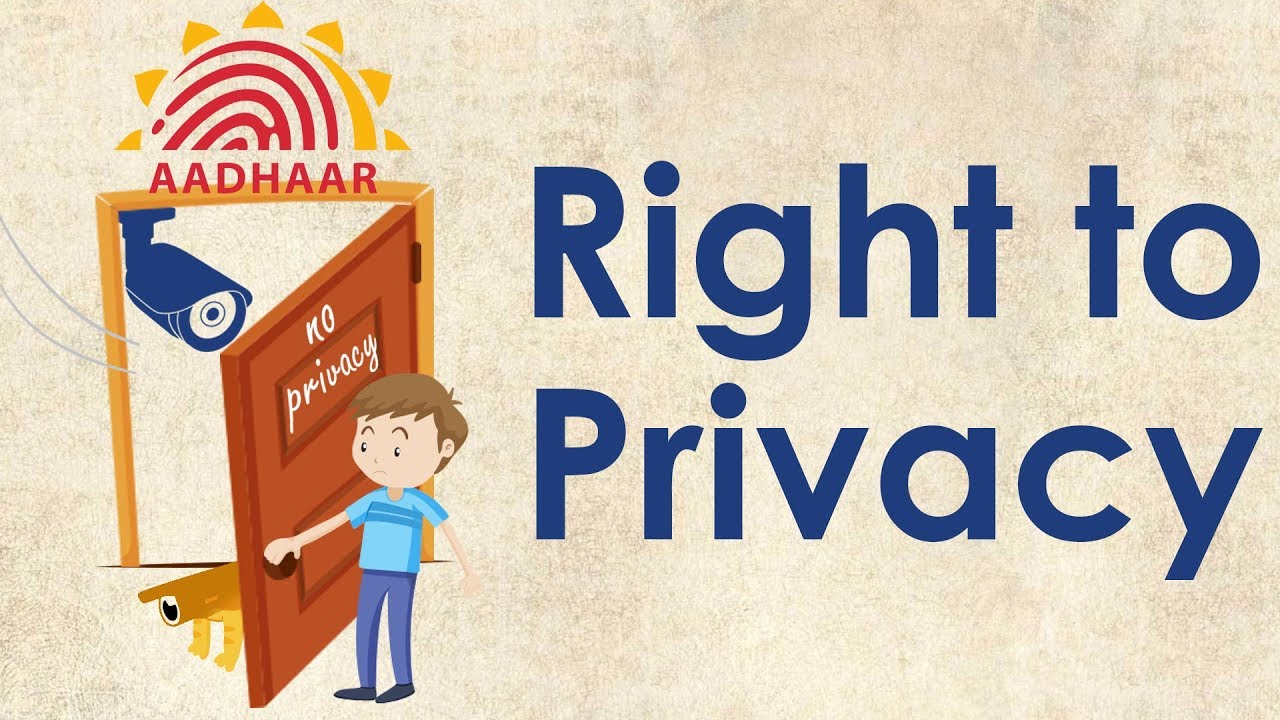 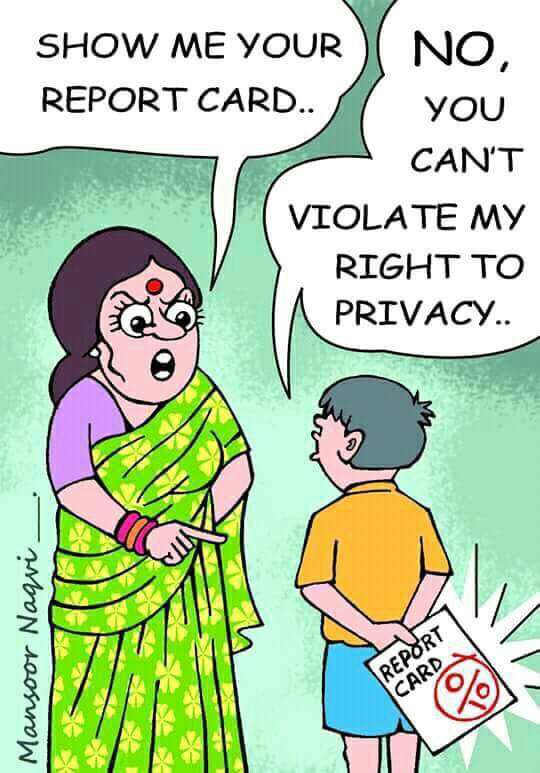 The Supreme Court on August 24 2017 ruled that ‘individual privacy is a fundamental right’. The ruling by a rare nine-member bench ruled ‘the right to privacy is protected as an intrinsic part of Article 21 of the constitution that protects life and liberty. This ruling is based on an array of petitions that challenge the mandatory use of Adhaar cards, which is a 12 digit unique-identity number issued to all Indian residents based on their biometric(like finger print and iris scan), and demographic data. This data is collected by the Unique Identification Authority of India (UIDAI), a statutory authority established on 12 July 2016 by the Indian government under the Ministry of Electronics and Information Technology, under the provisions of the Aadhaar(Targeted Delivery of Financial and other Subsides, Benefits and Services) Act, 2016.Aadhaar is the world’s largest biometric ID system with over 1.171 billion enrolled members as of Aug 15 2017.over 99% of Indians aged 18 and above have been enrolled in Aadhaar, which the World Bank Chief Economist, Paul Romer described as ‘the most sophisticated ID programme in the world. Having said that, is data collected to process the card safe? In other words, would it fall into wrong hands, which could misuse sensitive data for fraudulent transactions, and even to ‘eavesdrop’ into the citizens’ vital information, and violate their privacy? I for one would deem it uncomfortable to entrust some agency with my biometric details, even if it includes only my finger prints and the details of my iris!

Though UIDAI is entrusted with the responsibility of disbursing the cards to the citizens, the collection of vital data is undertaken by private agencies, which is the most pertinent concern of the citizens, with regard to safety of data collected by these agencies in these times of hacking, phishing, and financial fraud of all kinds of shapes and sizes, of exaggerated proportions. Aadhaar has immense potential for profiling and surveillance, according to critics. The government can potentially spy on every citizen, granting the state an ‘electronic leash’ on citizens and arm the government with sweeping powers over the citizens, who are liable to be closely monitored and tagged like animals. Citizens could eventually be treated as terrorists within their own nation, by a nosy government for any pretext it might deem justifiable, while the real troublemakers continue to have unshackled freedom, and all that it takes to go about with their misadventures, which amounts to and is directed towards wreaking the national fabric. Analysts say the government’s decision to hand over the Aadhaar enrolment process to private agencies for a license fee was wrong and the setup to secure private details was weak and prone to data mining and hacking, exposing citizens to data misuse and attack. The Modi-led NDA government which already has created mockery of Indian economy, which has been made a mess of through supposedly ‘revolutionary reforms’ like Demonetization and GST went on an arm-twisting mode by declaring Aadhaar essential for all services including tax returns,  opening bank accounts and securing loans, pensions and cash transfers for those entitled to welfare schemes, the last one on the list being the original intention of introduction of the originally voluntary process of data collection to be compiled into the final product- the Aadhaar card. This by the then Congress-led UPA government, headed by Dr. Manmohan Singh, which had P.Chidambaram as the Finance Minister. This ministry was instrumental in having put in place one of the most stringent tax regimes the nation ever witnessed until those times.

It is indeed ironic and a stark shame that it was the very same Chidambaram who was later charged with criminal conspiracy, cheating and corruption to the tune of Rs.305 crores in connection with alleged irregularities in foreign direct investments in INX Media and INX News. The former minister’s son is also accused of hand-in-glove involvement in the scam. So much so for the ways of politicians and their ways! This scam represented the fact that when politicians continue to bleed the nation to fatten their pockets, already bursting at their seams, the  hardworking common man, who convert blood to sweat through honest means are literally burgled in the name of ‘taxes’ at multiple levels. Starting with ‘taxation at source’ and apparently ending at the very end, seemingly! One wonders if the dead is charged the GST for the coffin and funeral rites! . It is for this most antinational process called taxation, which has been going on for years in India that the present NDA-led government has had the Aadhaar pointing at the head of the hapless citizens, who are asked to link the Aadhaar to the PAN, to even link it to mobile phones- all representing sweeping measures that have Indians feel like strangers in their own country. Never in the history of this nation has the hardworking and honest citizens felt uncomfortable with the ‘big brother’ keeping a tab on them, with every paisa they spend being monitored, with their bank accounts being peeped into. This could not be allowed.

And, this is when the Supreme Court stepped in by reminding the government, which was fast taking on the proportions of an occupying army. The court, through the ruling warned the government to mend its ways to have the citizens look like terrorists within their own country.

Aadhaar thus became the reason for catalyzing the ruling of the Supreme Court that had privacy of citizens affirmed as their fundamental right, and rightly so at that. Have the judgment dealt a mortal blow on the Aadhaar? No. Not yet. The verdict of the court does not comment on whether the government’s demand for Aadhaar to be linked to all financial transactions amounts to infringement of privacy. As the court takes time to loosen the government’s grip on Aadhaar to whip its own citizens with, the politicians have gone on their usual public exercise of settling scores over the matter. The Congress in the opposition who in fact introduced Aaahar in the country while in power terms the court ruling as a ‘setback’ for the government, which the latter vehemently mocks at and denies.

Apart from the Adhaar, other issues were also touched upon by the judges who constituted the nine-member bench. they included at the core of privacy, matters such as preservation of personal intimacies (which could render those moral policemen and culture vigilantes jobless), sanctity of family life, marriage, procreation, sexual orientation and the home, a woman’s freedom of choice whether to bear a child or abort her pregnancy, especially if the pregnancy is a fallout of  rape, telephone tapping, internet hacking by state, interference by state and non-state actors from allowing individuals to make autonomous life choices.

Thus, the court has touched upon and included an array of entities that contribute to human existence. But are the issues alluded to by the court really matters of privacy in its real sense? Aren’t they matters of choices? Are choices extensions of privacy? If yes, the court could be justified to include the issues mentioned within the ambit of ‘privacy’.

The other question that goes bagging is- is ‘privacy’ really existent in this nation at all? These are times when novel modes of protests such as ‘kiss of love’ are resorted to against moral policing by the so-called ultranationalists and rightwing bigots. ‘Kiss of love’ has couples kissing in public to defy and protest against ‘moral activism’ by rightwing forces, as was played out in Kochi, not too long back. These are times when citizens, especially women do not hesitate one moment to display their skin in the name of entertainment and advertisements. ‘Movies’ being churned out of Bollywood these days reek of sexuality, and sensual allurement in the extreme to almost look like sensual orgy! Advertisement hoardings almost resemble centre spreads of those porn magazines, all for the sake of big money being offered to those who have no qualms in exposing their skin in all its ‘glory’ to the world. Is there something more private than one’s own physical form? If citizens do not think twice to self advertise, which has become the norm in these days of social media like the face book and WhatsApp, where the individual flaunts practically everything without inhibitions, what ‘privacy’ are we talking about?

The Aadhaar pales into insignificance before these concerns. Is aadhaar the most sacrosanct yardstick of ‘privacy’? Has the Court ruled on a nonissue? Has the ruling amounted to exhuming buried corpses?