Democracy being exsanguinated in the south 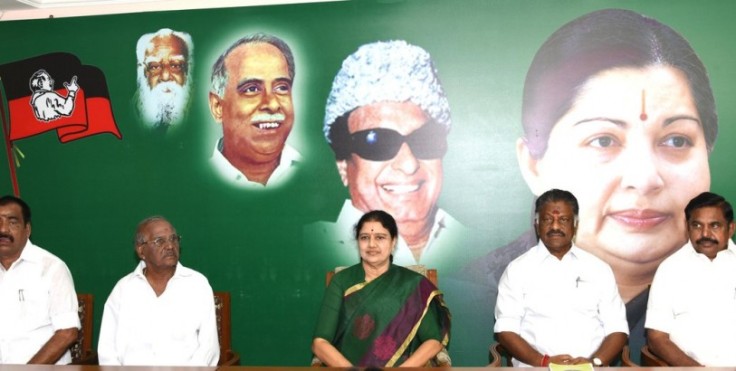 Tamil Nadu, the state in Southern India has been in the headlines for quite some time now.

Jayalalithaa Jayaram, actress turned politician served as Chief Minister of the state from 1991 to 2016. A colleague (in tinsel town) and a close confidante of former Chief Minister of the state, MGR, also an actor turned politician, she climbed to the highest echelons of Tamil politics, first as an ordinary worker, and later as General Secretary of the political outfit, the AIADMK. Though not blemish less, tainted by the Disproportionate Assets case, and numerous corruption charges, and up against some tough political opponents like the DMK and the INC, she governed the state with an iron hand, much along the lines of the former Indian Prime Minister Indira Gandhi. Seemingly ruthless and abrasive, she governed the state with admirable efficiency, initiating certain populist measures, some draconian, and others healthy (like the ‘Ammathottil’ scheme wherein she placed cradles into which infants being thrown away, just because they are female, a practice rampant in parts of India could be deposited such that they would be looked after and cared for by the state). It was also her practice to distribute laptops, saris, rice and colour TV to the citizenry of the state free of charge, mostly during election times to ‘buy’ votes (as was alleged). Love her or hate her, to the people of Tamil Nadu, she came to be their Amma(mother). Her stature was such that one couldn’t imagine a Tamil Nadu without Amma. She, to her people, came to stay not only their mother, but their darling too. She did nothing that stood in the way of Tamil ‘pride’, a rather strong sentiment. Her influence not only was a force to contend with in South India, also extended to New Delhi, where, at a time, she was one among the top contenders to run for the Prime minister’s office. She had as a close confidante and constant companion in Ms. Sasikala Natarajan, whom she often referred to as her ‘sister’, whose close proximity to the ‘iron lady’ and strong, and seemingly often inseparable comradeship donned on her the title ‘chinamma’(mother’s younger sister).Chinamma is also a co-accused in the Rs, 63 crore Disproportionate Assets case, along with ‘Amma’. Chinamma allegedly misused her closeness to Amma to amass wealth for her family members. She, along with Amma was arrested on 7 December 1996 and remanded to judicial custody for 30 days in connection with the color TV Scam.   Jayalalithaa, known to suffer from serious ailments fell serious ill, and following 75 days of hospitalization, died on 5 December 2016.An entire state which lost its mother was benumbed with grief.  Wailing citizens, irrespective of age and gender could be seen on the streets deserted with shops downing their shutters as a mark of respect and grief. Chinamma acted fast to have O Paneerselvam(OPS) assume office of Chief Minister, left void by the demise of the once larger than life, but now dead Amma.

OPS, a diehard Amma loyalist is a MLA who won from the Bodinayakkanur Assembly constituency in 2011, and therefore was constitutionally valid to be sworn in as Chief Minister. Chinamma’s intention to quickly instate OPS as Chief Minister was genuine. She wanted to prevent the AIADMK, now bereft of its iron lady, from becoming vulnerable to poaching by other parties or from engaging in a leadership struggle. The transition of power from Amma to one of her loyalists and man Friday- OPS (he had held the fort to ensure status quo in the state when Amma had had to serve a prison term) was smoother than expected. As Amma’s mortal remains were being interned at the Marina beach in Chennai, Chinnamma performed the last rites, as Amma had no legal heir to do the proceedings. OPS made sure, through an efficient police force that Chennai remained uneventful, much unlike when MGR and Annadurai, the other stalwarts of AIADMK and former Chief Ministers of Tamil Nadu died, when, people beside themselves with extreme emotion committed suicide by droves in the state. With Amma interned to history at the marina Beech, OPS took to administration earnestly with complete and unconditional backing of the AIADMK and his other MLA colleagues, when he was tested with a contentious, vexed and an extremely emotional issue of ‘Jallikettu’.

Jallikettu , known to be practiced during the Tamil Classical Period(400-100 BC) is a traditional ‘spectacle’ and one of the oldest blood sport as part of Pongal celebrations(a Tamil festival). Bulls bred specifically by village folk for the purpose are released into a crowd of people  (call them human participants) who attempt to grab the large humps of the charging bulls as long as possible to bring them to a stop. In the process, inflicting gory and life threatening polytrauma on the participants. Hospitals around the villages where the gory ‘sport’ is conducted remain in ‘battle readiness’ to treat numerous participants who are brought in with severe injury, thanks to the bulls’ vicious horns (from 2010 to 2014, there were approximately 1,100 injuries and 17 deaths reported) the bull (to render it more fearsome and powerful), before being released into the crowd, is subjected to practices such as prodding with sharp sticks or scythes, snd extreme bending and biting of tail to fracture the vertebrae. There are also reports of the bulls being forced to drink alcohol to disorient them, or chilly peppers being rubbed into their eyes and nostrils to aggravate them.     Piqued, the Animal Welfare Board of India filed a case in the Supreme Court of India for an outright ban on the sport, a cousin of the famous Spanish bullfight, because of involvement of extreme cruelty to animals and public safety. Days ahead of Pongal, a fresh debate erupted and much dirt kicked up when OPS wrote to Prime Minister Modi requesting him to overturn the existing ban(imposed by the Apex Court in May, 2014),  on the bull taming ‘sport’, which is strongly identified with Tamil culture, and therefore it’s pride. Unmindful of the law of the land, the emotional people of Tamil Nadu wanted the ban on the blood sport imposed by the court after a clutch of petitions by animal rights groups and the PETA (People for the Ethical treatment of Animals) lifted. Irrespective of the Court ban on the blood curdling sport, the people in the state wanted the traditional sport reinstated, come what may, and OPS promised to ‘do everything he possibly can’ to have the bulls charging at humans once again, all over Tamil Nadu. The entire state, drunk on Tamil ‘pride’ was up in arms. They took to the streets in large numbers. Normal life was stalled. Animal rights groups and the PETA were heckled and booed. Students boycotted classes. A large number of people congregated at the marina Beach threatening suicide if the sport wasn’t reinstated, and Tamil pride restored.  The state and its machinery were paralyzed. OPS, Chinamma and all political parties, irrespective of lineage, and film artists jumped into the arena, literally). The ban was partially lifted through an ordinance and the sport resumed with more blood spilt on Tamil soil, much to its glee, honor and pride.

With the bulls back to their charging ways once again, Chinamma decided that time was ripe for her to charge too. The AIADMK as a political party reportedly met her and demanded that she take over as Chief minister of Tamil Nadu, to take over the baton of administration that was briefly passed on to OPS from the invincible Amma’s hands. She demanded OPS’ resignation as caretaker chief Minister, which he did without second thoughts. All hell broke loose in the state, which was embroiled in a constitutional crisis. It was now up to the governor of the state to take a constitutionally adroit decision, as the representative of the Indian President and guardian of the constitution. The governor of Tamil Nadu, also in charge of Maharashtra was away in Mumbai when OPS was gored by a charging Chinnamma.   OPS, being an elected member of the assembly had every constitutional propriety to continue as Chief Minister. Chinamma had none. Moreover the disproportionate Assets case followed her like a shadow. She was simply unfit to be Chief Minister of the state, constitutionally, ethically and morally. The people did not want her to be their Chief Minister.

Two factors that slowed down Chinnamma’s march to the Chief ministerial chair were (1) the governor’s absence from the state, and (2) her involvement in the Disproportionate Assets case, which awaited the Supreme Court’s verdict.

OPS, desperately wanting to stave off an inevitable split of the AIADMK party down the middle was a confused man. He desperately sought an amicable solution to this unforeseen event which threatened Indian democracy, known for its resilience and maturity. The entire nation watched OPS’ maneuvering, or the lack of it. The state of Tamil Nadu made no whimper. Probably tired by the jallykettu agitation, not a single soul agitated against the threat to the state’s democracy. No man or bull took to the streets. They couldn’t appear to care less. Evidently, Jalliketu was up ahead on priority than violation of Tamil democracy. They who wanted blood on the bulls’ horns, did not bother about a bleeding democracy! Only one man was troubled and desperate-OPS.  Silence from the habitually emotional and volatile state was deafening. Like a son at the crossroads, searching for a solution, OPS ‘meditated’ before Amma’s grave, before hundreds of cameras as the entire nation watched during prime news time. Getting up from ‘meditation’, all indecision and dithering looked far removed. It seemed as though Amma had indeed spoken to him. ‘I will continue to be Chief Minister’, ‘I was forced to resign’ he spoke into the waiting journalists’ microphones. India sat up and watched with baited breath a drama enfolding. ‘I’ve been trusted to be the Chief Minister by Amma’ he continued. For Chinnamma, this was a bolt from the blue. The sudden transformation of a subdued and confused OPS into a decisive and resolute man shocked her ‘he’s lying’. ‘He’s a traitor’ she retorted. She claimed support of majority MLAs belonging to the AIADMK, and therefore the Chief ministerial chair which OPS resolutely moved away from her over the days. The governor having returned to Chennai, both the contenders met him to stake claim to be Chief Minister on the strength of the Majority MLAs’ support. With the bulls now firmly back in the sporting arena at least temporarily, horse-trading in the political arena in Tamil Nadu looks almost certain with the governor as umpire!     At the time of writing, the bull [sic] is entirely in the governor’s court! It remains to be seen which one the bull would chose to charge at and gore into- the politically and legally worthy and deserving OPS, or a scam tainted also-ran and a political novice that chinnamma is, trying to seize power on the sly through the backdoor!

2 thoughts on “Democracy being exsanguinated in the south”