Is ‘patriotism’ all about the national anthem and the tricolor? 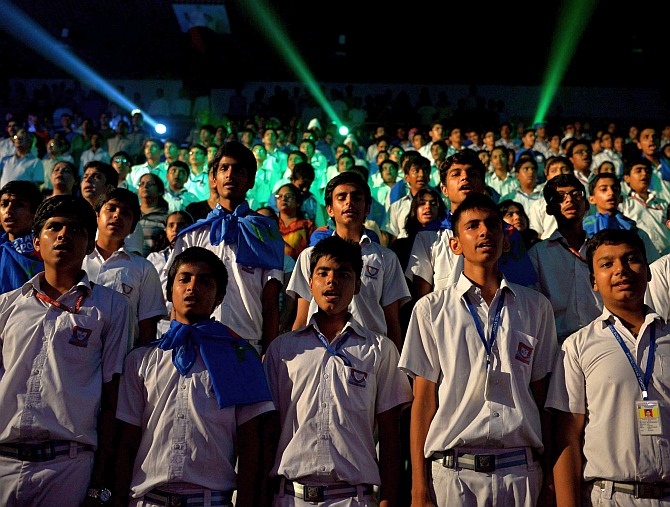 The Supreme Court recently asked all cinemas to play the national anthem, simultaneously screening the tricolor on the screens ‘for the love of the motherland’. ‘All moviegoers must stand up when the anthem is being played, and all doors of the cinema halls are to be closed to prevent people from moving around’. The court added. It is feared by many rightfully, that the move would encourage nationalistic activism and overzealous self-appointed vigilante groups going on an overdrive. Teasing out patriotism by arm-twisting citizens has already resulted in an unsavory incident when a man at a cinema in Goa was beaten up for not rising up when the national anthem was being played, only to be discovered later that the unfortunate man was indeed a paralytic on a wheelchair. For a nation, already in the grip of skewed versions of nationalism, and vigilantism over the irrelevant,  such moves inducing citizens to wear patriotism and nationalism on their sleeves, will only add oil to the fire, already threatening to engulf the nation. Does ritualistically rising up to a mere song, or saluting a piece of multicolored piece of cloth amount to ‘patriotism’? The Oxford English Dictionary defines a patriot as a person who strongly supports their country. One cannot imagine how the learned court’s bidding can help support India. Patriotism and nationalism can only be achieved if the dreams of India’s founding fathers are realized, and Indians swear to bring their lofty ideals and dreams to fruition. Can we please stop raping our women?Can Indian men say ‘NO’ to dowry and trash bride-harassment on account of dowry? Can the fathers in India stop sexually assaulting their own daughters? Can every Indian be known only by his or her name rather than by gender, caste creed and religion? Can we swear never again to pull down places of worship on any pretext, sullying India’s plurality? Can we turn our backs to religious conversion, and stop yelling from street corners ‘my God is better than yours’? Can we stop conniving with anti-nationals to tick off bombs to blow fellow-Indians to smithereens?   Can the people who they elect to govern this hallowed nation rise above corruption and greed for ill-gotten wealth? Can the honest tax payer be provided basic amenities that are rightfully theirs’? Can the judiciary speed up dispensation of justice and free those under trials languishing in the dungeons? Can Indians be free to decide what they will eat? Can we decide to educate every girl child in India? Can we free children from the bondage of child labor? Can the sick in this land be provided access to affordable and quality healthcare? Can we assure the aged parents in this land a dignified life, or at least a dignified death? Can we swear to protect the environment? To give India’s farmers what is rightfully theirs? If we can, then every Indian will be an example of a true patriot and a nationalist. After these are achieved, we will as a nation rise up as one to the national anthem wherever it is played, and salute the tricolor wherever we see it unfurled.

2 thoughts on “Is ‘patriotism’ all about the national anthem and the tricolor?”