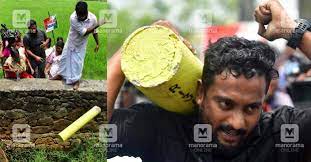 The southern Indian state of Kerala is in the throes of widespread protests across its length and breadth. The protests are spearheaded by opposition parties, the Congress-led UDF and the BJP-led NDA. The protests threaten to be long drawn and to take on anarchic proportions through violent methods employed by a determined opposition.  The ongoing protests have had women partake in the same with vigor and brawn which matches, or even supersedes those of male counterparts, forcing the Kerala police to use force against them. Which the opposition employs to charge the government with ‘police excesses on women’. The vicious circle goes on and on, and looks poised to blow over into nastier proportions. Blowing to the winds clime for unhindered governance, and peace in Kerala.

The opposition parties are protesting against the K-rail or SilverLine project, the brain child of the second LDF government headed by CPM’s Pinarayi Vijayan, who returned to power through a thumping victory in the hustings of 6 April 2021. Reinstating Kerala as the only Indian state governed by the reds.

The K-Rail project envisages construction of a 529.45 km semi high-speed rail corridor that will connect Thiruvananthapuram in the South and Kasargod in the North. The Rs. 60,000 crore project, slated to be completed by 2025 will have Electric Multiple Unit (EMU) type trains with 9-12 coaches running at 200km/hr (120mph) that will reduce the current traveling time between the two cities from 10-12 hours to 4 hours. The project expects a ridership of 67,740 passengers/day, with a travel charge of Rs.2.75/km. The proposed rail corridor will pass through 11 of Kerala’s 14 districts, and will stop at 10 stations. The SilverLine project is proposed to be 100% green project, and will adopt last-mile connectivity, with multimodal integration, system-driven e-vehicle public transport system, charging as well as parking stations, which  will take Kerala to next generation of urban mobility. The project will also adopt the latest world-class rail system technology like signaling system of ERTMS level-II with automatic train control system, ticketing, communication, fully air-conditioned rolling stock with modern passenger amenities.

Won’t Kerala benefit greatly from this supposedly hi-fi and state-of-the-art rail corridor? Shouldn’t the state be proud of this fast mode of transportation?

Why is the opposition vehemently against the construction of the K-rail? Why are they violently uprooting the yellow survey stones meant to delineate the land through which the corridor will pass to throw them into water?

To be fair to the nay-sayers, their objections need to be examined;

From the arguments against k-rail, and widespread protests growing against it all over Kerala, the seemingly unpopular project seems jinxed at its conception.

For arguments sake, are there not other high-speed train corridors operating in India? Is the ‘idiotic’ K-Rail first of its kind? The fastest train in India is Vande Barat Express which attained a top speed of 180 km/hr during a trial run. The fastest operating train is the Gatimaan Express, which operates at 160 km/hr.  The country does not have high-speed rail corridors, or lines operating at 200 km/hr. However, a total of twelve high-speed corridors are planned. One of them which will link Mumbai and Ahmadabad is under construction. This 508 km corridor is being constructed along the Western coast. The E5 series Shinkansen trains that will ply at 320 km/hr is expected to carry passengers between the two cities in three hours at rates cheaper than flights, when the project is expected to be completed by 2028.

Why has K-Rail alone been red-flagged by technocrats, experts, political parties and citizens? Even women are motivated to physically uproot its survey stones!

This is simply because the two political fronts in opposition in Kerala want to utilize the K-Rail to derail the incumbent LDF government and seize power through the backdoor. Both of them have their own compulsions and reasons to utilize the K-rail’s construction to achieve their political ends. Paradoxically, the BJP and the Congress are sworn nemeses in the centre. But in Kerala, they’re brothers-in-arms to precipitate a constitutional crisis by creating an anarchic situation through violence and hooliganism, to seize power through the backdoor.

Construction of Kochi Metro had in fact razed many a business enterprise and livelihoods for its construction. Where were the crocodiles who are currently shedding tears for families that might be displaced and lose land on account on the K-Rail? Where were their tears when the Kochi metro was being constructed?

The Congress-Led UDF is still licking the wounds of electoral defeat that the LDF had inflicted on it in the Assembly elections of April 2021. The UDF has still not been able to accept defeat gracefully. To the UDF, the K-Rail has come a cropper to throw spanners in the wheels of unencombered and unhindered governance by its sworn nemesis, the LDF. Moreover, K-Rail is a perfect distraction to the ugly divisionism and distasteful factionism and in-fighting plaguing the Congress in Kerala.  What morality does the UDF have to whistle K-Rail construction to a halt? Wasn’t it under the 2011-16 second Oommen Chandy ministry that the Palarivattom over-bridge across the Pipeline junction on National Highway 66 bypass in Kochi in Kerala was built spending Rupees 47 crore? The same over bridge had developed cracks within just 3 years of its construction rendering it unfit for safe commuting. It was subsequently dismantled and reconstructed. Costing the exchequer another whopping Rs. 79 crores to feed rampant corruption of the then UDF ministry. The current UDF has absolutely no moral right to shout down the SilverLine project.

As for the BJP-led NDA, it is yet another desperate bid to bite off its share of power in Kerala, the only Indian state which has successfully staved off the dangerous and disruptive NDA from winning a single seat through elections. They tried it once during the 2021 Assembly Elections in Kerala, exhorting Lord Ayyappa when they tried to utilize the vexed Sabarimala issue- that of permitting women to worship at the Sabarimala hill shrine. The Lord Himself saw through the designs of power-hungry NDA. He knew that it wasn’t devotion towards Him that the NDA was drumming up passions of Kerala’s voters. The NDA failed to win a single seat. Even their trump card- the metroman E Sreedharan who contested from Palakkad crashed to defeat. The NDA’s wounds of the electoral mauling too haven’t healed like the UDF’s. They too had a political score to settle. Every right-thinking citizen of Kerala knows that the ire of the NDA and UDF spearheading the campaign against K-Rail is not out of genuine concern or love of Kerala, but that it is a manifestation of vengeance of having been denied power at the 2021 elections. This is evident from the manner in which even a person of the stature of Mr. Sreedharan led from the front to wave the K-Rail construction to a stop by leading a NDA delegation to Delhi to achieve that. The Rs.500 crore Kochi Metro which was constructed under the guidance of E. Sreedharan has incurred a loss of Rs.1,092 crore since its inception in 2018. This has been brought by the ridership of Kochi Metro falling far short of that projected in its DPR. This is something for the metroman to chew on.

Even V.Muraleedharan the current Union Minister of State for External Affairs & Parliamentary Affairs of India was all glee and exhibited had an air of fait accompli when the centre denied permission for the construction of the k-Rail. This man, the only one to represent Kerala in the present Central ministry was in the forefront to ensure that the K-Rail wouldn’t materialize in his state. If this isn’t dirty politics, what is?

Having said this, the onus is entirely on the incumbent LDF Ministry in Kerala whose brainchild the K-Rail is, to let go of political ego, adamancy, highhandedness and one-upmanship. To instead see reason. To examine in absolute earnestness and selflessness each and every argument against the K-Rail by experts in the field. It is the responsibility of the government to apply science and technology to the project. To debate and to hold consultation with the aggrieved parties and, more importantly, citizens wary of the project to win their confidence. Hairs must be split. Doubts must be dispelled. Fears allayed. The K-rail, if and when it runs, must run on the bedrock of science and technical soundness, and not on the quicksand of power-hungry politics, in which it has already got itself entangled at its conception. The K-Rail must be flagged off by politicians not attempting to climb on the echelons of power through the backdoor by vehemently opposing its construction, but by those who mean well for Kerala.

Do I sound Utopian? I know I do!