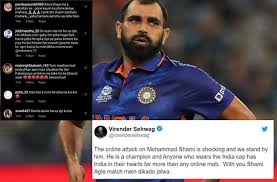 It was warlike atmosphere in the Indian subcontinent on Sunday, October 24 2021. Though the ‘war’ was being waged in distant Dubai.

But, reverberations of these ‘wars’ are invariably felt in cricket-crazy subcontinent, where cricket is religion, cricketers, Gods, and the congregation unruly fundamentalists.

Sunday, the October 24th 2021 was one such day when cricket teams of the two rival nations went to ‘war’ in distant Dubai. The occasion and the stake were gargantuan. It was World Cup of the slam-bang version of modern-day cricket – the T20 format. And that cup had to be brought home. Come what may. India had never lost to Pakistan in any match in world cup competition of any format of cricket, even if the title eluded her ultimately.

Virat Kohli, the Indian captain lost the vital toss to his Pakistani counterpart on that Sunday. Pakistan chose to field first. Pakistani bowlers, keeping with their tradition of pace and accuracy limited the Indians to 151 for 7 in allotted 20 overs. The famed Indian batting caved in on that Sunday afternoon that simply wasn’t theirs. Pakistani bowlers had Indian openers and one-down batsman Virat Kohli queuing before their dressing room in a jiffy. A recovery which cricket-crazy Indian fans hoped for never happened. Rather, was never allowed to happen by a determined Pakistani team which bowled and fielded as though it was their last day on Earth!

Pakistan, therefore, had to make 152 runs in 20 overs, which they did without breaking much sweat. With 13 balls to spare. 151 was too measly a total for Indian bowlers Mohammed Shami, Bhuvaneswar Kumar, Jaspreet Bumrah and others to defend.

This was something which Indian ‘fans’ could not stomach. The nation had lost a war like never before!

They reacted to the loss most distastefully, and shockingly, like they had never done. Ever.

In Punjab, students from Kashmir were beaten up. A student at an engineering and technology institute said dozens of men armed with hockey sticks and batons attacked them as they watched the closing stages of the match. ‘They entered our rooms, switched off the lights and beat us, and destroyed our laptops’, according to him. Were Kashmiris like him targeted because parts of Kashmir witnessed celebrations over the Pakistani victory, as is wont to happen after every Pakistani victory on a cricket pitch? However, even such incidents do not condone such atrocities against Kashmiris within India. More unpleasant incidents followed. Families of three Kashmiri students who were arrested after allegedly celebrating Pakistan’s win over India ere heckled and manhandled outside an Agra court. A medical student in Srinagar claimed she received death threats for objecting to pro-Pakistan slogans raised by certain students in her medical college. If this is what is in store after cricket matches between the two nations, such matches ought to be banned. There are other uninterested citizens in the country who desire a life free from such irrelevance.

The match also sparked violence in neighboring Bangladesh, where two Pakistan supporters were beaten by Indian fans as they celebrated the win in a Southern district.

But the worst form of reaction to the Indian defeat came when a torrent of abuse was aimed at Mohammed Shami the only Muslim player in the Indian team.

Hundreds of messages on Shami’s Instagram account called him a ‘traitor’, and demanded that he be thrown out of the Indian team, even though the Indian captain Kohli graciously accepted defeat by acknowledging that India was ‘outplayed’ by Pakistan.

There wasn’t any religion involved in the result of the Sunday match. Pakistan played better than India on Sunday the October 24 in Dubai’s Cricket stadium, and they won. India played badly. India lost. That was it! That was all there was to the match and it’s result period!

Moreover, Shami wasn’t the only player of the Indian squad that lost. There were other ten. The eleven were collectively responsible as a unit for having played badly to lose to Pakistan. Then why single out Mohammed Shami alone for the defeat?  He was a Muslim. And others weren’t.

Ever since the present ruling disposition has been having its way in New Delhi, the very script of nationhood had been rewritten. People are identified by their faith, than their name, profession or place of residence. And Islamophobia has been allowed to reach its zenith by a government that seemed to be in agreement with the self-defeating trend that had infiltrated the Indian psyche.  And that was why Mohammed Shami alone was singled out and called a ‘traitor’ for Indian cricket team’s loss to Pakistan.

Almost every institution beginning with education, to freedom of expression, independent press, and right to protest had been badly tampered with. Now, it was the turn of cricket to suffer in India that had decomposed beyond recognition since May 30, 2019. In such times, isn’t it the duty of any well-meaning government to step in and apply balm to festering wounds, to soothe ruffled feathers, to instill poise and better sense, to prop jaded spirits? None from the government spoke a word. Political leaders like Shashi Tharoor, Arvind Kejriwal and Omar Abdullah tweeted encouraging words for the losing team. It took the AIMIM supremo Asaduddin Owaisi to be the only politician to stand by the pained Shami most vociferously. Owaisi also wondered aloud ‘what Islam had to do with cricket’. Owaisi did what the Indian Prime Minister or somebody from the government should have. Such a move from the government would have sent the right kind of message to wayward and the puny-minded who chose to drum up communal passions that evening. The government and its head who would have had been at their verbose best had the team won, was eloquently silent!

Cricketers, past and present stood by Shami most eloquently in his moment of degradation. Sachin Tandulkar, Virender Sehwag, VVS Laxman and Yuzvendra Chchal were quite verbose in condemning the treatment meted out to Shami.

Firecrackers went off in Pakistani cities over their national cricket team’s victory over archrival India. Pakistani interior minister went to the extent of describing Pakistani victory, ‘Islam’s victory’. But that was goings-on within Pakistan from which nothing better or different is expected. What were shocking and simply unacceptable were small-mindedness, immaturity and naked communalism that added to the pain of defeat on the Indian side of the LOC. Within India which had lost her soul and nationhood. When blatant communalism soiled the cricket pitch, adding insult to injury of an ignominious defeat at the hands of an archrival.

If India doesn’t retrieve her soul and rediscover basic national sensibility, she would plunge into a bigger defeat of losing more or less everything that had propped her up as once-upon-a- time great country. If not, she’ll be banished to the trashcan into which wayward countries are usually abandoned by saner ones.

India must rediscover the grace with which defeat by Pakistan in a cricket stadium ought to be accepted.

Mercifully the black Sunday in Dubai was not without its share of silver linings. Soon after the winning run was scored by Pakistan, Indian captain Kohli was seen hugging his Pakistani counterpart in congratulatory gesture. Other Indian players were also seen to exchange pleasantries with their victorious neighbors across the LOC. And they weren’t called traitors for their gesture. Can we hope there is still hope left, after all? Hope we can!