The virus-SARS-CoV-2 has been on the prowl from late December 2019. It has devastated humanity through sickness and death in pandemical proportions. CORONA-19, its disease entity has till date infected 14.8 million worldwide and has claimed 614,000 lives. India hasn’t been spared. Of 1.19 million Indians infected 28,732 have succumbed. I live and work as a healthcare provider in the Southern Indian state of Kerala. A state which once was thought to have flattened the viral curve. And Its chain broken. This when rest of India was reeling under the viral onslaught. Kerala’s cocoon shockingly found itself too fragile to shield her from the viral march. As of 22 July 2020, among the13,994 infected, 44 have perished. Kerala’s Statistics thus far might seem saner than other Indian states. But, finer and nuanced underbelly of statistics seem to rob the sheen off Kerala’s relatively preserved COVID imagery. Days taken for cases to frog-leap in multiples of thousand dipped by the day. If it took 118 days for cases to touch a thousand mark, it took only a mere 50 to breeze past 10,000. Initially, NRKs from other nations and states formed majority of those testing positive. This eventually changed. Those infected through local transmission outnumbered the former. Whispers of community spread, the dreaded phase IV of a pandemic was rife among Kerala’s healthcare community. On July 17 2020, when more than 50% of samples tested in Poonthura and Pulluvila in Thiruvananthapuram tested positive, Kerala’s Chief Minister officially declared presence of community spread of COVID-19 in Kerala, which had won global accolades for triumphantly vanquishing the Nipah Virus in 2018. Kerala donned another first in COVID-stricken India- the first state to admit and confirm community transmission. Adding to the grim picture is statistics which confirmed 60% testing positive being asymptomatic. Presence of asymptomatic carriers within the community stared at Kerala’s face, much to her discomfiture, distress and panic. July 16 2020 reported local transmission rate of 32%.

What followed was the inevitable. Healthcare facilities in Kerala, both in private and public sectors had people testing positive for the virus within their precincts. These included patients with symptoms of COVID-19, and those who sought treatment for non-COVID disease entities, patient Attendants, doctors, nurses and paramedical support staff. This is inevitable when an infectious pandemic very much remains untamed for dearth of credible treatment strategies, and a vaccine. It is no sin for healthcare facilities to have those infected with the offending organism within them in a pandemic. Neither it is sin for those caring for them contract the infection. It is only in healthcare facilities that one finds the infected. The sick. They are neither found, nor expected in discotheques and bars!  Kerala and her citizens who had somehow come to expect and assume friendlier disposition at the virus’ hand panicked when it knocked on the state’s doors baring its demoniac self. Overconfidence from having won over Nipah probably had robbed Kerala’s citizens of ability to expect or even consider vulnerability.

Infection within hospitals in Kerala had them close down either partially or entirely for the purpose of(1) quarantining infected staff and contacts,(2) rotating staff duty to protect them from infection and to ensure a healthy reserve to fall back on, and(3) more importantly to disinfect hospitals in the interest of inpatients, staff and new patients. Very much in keeping with their responsibility indeed to do so. Kerala’s press habitually inimical to her healthcare sector shouted from rooftops the identity of facilities harboring infected patients and staff by naming them, spreading panic in localities where such facilities existed. Presence of police and barricades deployed to enforce containment and limit movement around such facilities had local population in extreme fear, panic and uncertainty. Staff from such facilities were thrown out of their accommodation facilities. They were turned away from their homes by frightened neighbors. Doctors working in such facilities were looked upon with suspicion in their neighborhood. They were advised against ‘putting their lives at risk’ by ‘concerned’ dear and near. Painful indeed it is to behold an attitude of blatant ingratitude among the very people who healthcare facilities and workers brave the pandemic to serve. Short indeed is human memory.  Sadder still to see them pick up stones meant for people willing to sacrifice themselves for them.

This when the sound of utensils that were struck together to thank the ‘CORONA warriors’ still ring in their ears. When rose petals showered from choppers still stick to the ‘warriors’, and the light lit to thank them continue to blind them!

The so-called ‘CORONA warriors’ in Kerala have overnight become ‘CORONA outcasts’ in the hearts of her supposedly ‘cent percent’ literate populace, who had watched with disgust, horror and unbelief when similar sordid drama or worse unfolded in other parts of India in the initial days of her battle against the virus. 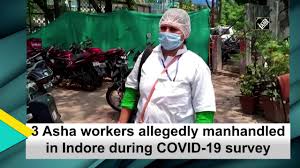