‘Living with the virus’; the conundrum

“In a way Corona is like your spouse. Initially you try to control it, and then you realize you can’t. Then you learn to live with it”

Ever since the first case of COVID-19 was reported in China’s Wuhan in December 2019, and later cut loose into a pandemic, human kind had been grappling with a rather paradoxical option; that ‘of living with a pathogen’ that has been sowing infection and reaping death of huge magnitude. This strange option and stranger circumstances that has victims of a pathologic organism on a rampage to even consider it is direct fallout of existence of two glaringly opposing and incongruent forces-(a) that of medical science, working overtime to somehow limit the viral damage, or, if possible preside over last rites of the very last SARS-CoV-2. This scientific force had, as its armamentarium, (1) lockdown, which till date has proved to be most effective to at least limit viral transmission, (2) a whole gamut of healthcare providers, and (3) yet to be evolved effective treatment modality, including an effective vaccine, on which rests the hope of the entire humankind, and, (b) a very potent, yet badly dented economic force, that has the world of finance, commerce and currency functioning like a well-oiled machine, manned by ‘financial wiz kids’. The lockdown imposed by numerous nations to hide potential victims behind bolted doors from the virus on a killing spree with the blessings of circumspective men and women of science and heads of nations had paralyzed the commercial forces. Locked up men essentially means sealed piggy banks. Nations panicked. Nations like India, sitting on potential powder kegs with population bursting at their seams, had the lockdown extended many times over. They prioritized limiting loss of human lives over sprucing up nose-diving GDPs. Nations like the USA threw caution to the wind. Their priorities were vastly different. To them GDPs on crutches proved more painful than loss of human lives, and they paid for it by thousands succumbing to the viral pandemic. 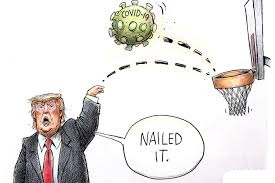 President Trump saw no sense in shielding victims from a contagion that had no credible solution against it, pharmacological or otherwise. The likes of Prime Minister Modi saw prudence in having his country’s 1.3 million shielded from the virus on a rampage, and to have them stay put. But, how long can human race be locked up, at the expense of a crumbling economy? This one consideration had nations and citizens toy with this option of ‘living with the virus’, or to learn to do so. Human kind’s tryst with the virus, at the moment seems to be a long-drawn one. This had market forces on panic mode win over scientific forces that appeared tardy in chaining the virus.

If the ultimate consensus to this one great dilemma, rather, to this tug-of-war between market forces rearing to go on nevertheless, and an essentially clueless scientific forces is to ‘live with the virus’, an arrangement will have to be dotted down on a stamp paper, as to the nature of the cohabitation of convenience.

Is the arrangement one of conjugation.  Of marriage between the two?  To go to bed with the virus? No way! Here is a pathogen which has already infected 6.15 million, and felled 3,72,000 worldwide. And infected 1,91,000 Indians and took the lives of 5,394 Indians, as of 1 June 2020, and counting! It’ll only be sheer foolhardiness and brazen disregard for human lives. Every major Indian city will witness an encore of New York. Mumbai almost already has, as an exemplification of natural history of a viral mayhem in an overpopulated community, with vast numbers living in slums.

Is the arrangement an inevitable undertaking to live together? Probably yes, unless and until an effective treatment option or a vaccine emerge, when that agreement can probably be called off. Man has been living together with umpteen pathogens, disease entities and other causes of death in large numbers, that it has been accepted as ‘a way of life’. Incidence of Tuberculosis in India is 2690 million, and its mortality, 32/100,000 population. 2000-3000 lose their lives annually to an eminently treatable infection, which seems to have a free run in India due to poor patient compliance to long-term medication, coexistence of HIV with Tuberculosis, and emergence of multi-Drug Resistant Mycobacterium Tuiberculosis.2012 had 50,222 Indians infected by the Dengue Virus, and 542 succumbing. India is placed fourth, accounting for 7 of malaria deaths in the world. 8,648 Indians were infected by the H1N1 virus by May 2017, and 345 succumbing to the same.2.25 million Indians live with some form of cancer. 7, 84,821 die of cancer annually, while Indians constitute 17% of those taking their own lives worldwide. The last 3 months of 2020 had 3,14,687 succumb to the Corona virus.3,69,602 perished to common cold.3,40,584 succumbed to Malaria, and 3,53,696 took their own lives, while 3,93,479 perished in road accidents. 2,40,950 succumbed  to HIV, and 5,58,471 had alcohol have the last laugh.3,16,498 fell to ill-effects of nicotine, and 11,67,714 succumbed to cancer(these are figures worldwide).  That’s the sordid tale of man living together with infectious and non-infectious disease entities, and even vices. These figures ultimately set off butterflies in the stomach of, not only humanity, but also healthcare providers, who are supposed to keep the former away from pathogens and other causes that claim their lives. It will certainly be with considerable pain that the corona virus finding a place in the above list be accepted.

If the consensus is ultimately to break free from the chains of lockdown necessitated by the Corona Virus, and to live with it, that arrangement will depend on the following (1) availability of vaccine, and it’s efficiency to offer immunity against the numerous strains of the virus. A study conducted by  Rajiv Gandhi Institute of Biotechnology at Thiruvananthapuram in Kerala has stumbled upon 5 strains of SARS-CoV-2, and has also observed that the virus has mutated into 11 subtypes, calling the bluff of vaccine cheerleaders  (2) emergence of effective treatment modalities, after the wheat has been separated from the chaff of numerous untried modalities that are yet to pass the scrutiny of well-conducted clinical trials, and (3) occurrence of relapses, which seems real, at this time, as other members of the Corona Virus family are notorious for relapses. It is ultimately the pattern of relapses- whether they will present as abrupt and disruptive tidal waves, or as unheralded or, 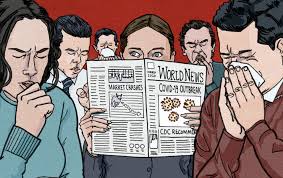 Maybe even genteel ripples caressing the shores that will ultimately have man decide on his modus operandi of living together with the Corona Virus. Going by the pattern that has emerged thus far, man will probably need to live with every relapse with a mask on his face, 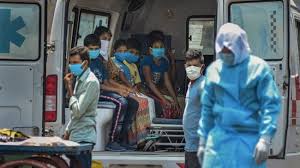 resort to social distancing, and meticulous personal and public hygiene. In the bargain, it looks almost certain that man’s tag of ‘a social animal’, might lose its sheen, if the virus decides to coexist with him for a substantial period in time, and vice-versa.