The science of healing and healers are hamstrung even to protest, even if they’re vandalized, because they deal with life and its preservation. Healthcare providers being responsible for preservation of life do not enjoy the kind of self-assumed immunity contractors, advocates and politicians seem to don, for broken promises and flawed services. That renders healthcare dispensation unique. Simply put, healthcare facilitation and it’s purported ‘success’ do not operate on a 4+5=9 equation. Here, 6+3 is also 9! This is because the bedrock of the profession is the human body, one of the most unpredictable commodities, much unlike an automobile in the hands of a mechanic. This intricate amalgam of organ systems and its response to medical treatment depends on numerous factors like patient factors, disease factors and treatment factor. This is pronouncedly evident in the ongoing COVID-19 pandemic, which has thus far infected 4,196,347 and felled 284,034 globally, at the time of writing. That 1,500,269 recovered is glad tidings. How did they recover and others succumb? The equation rests on the interplay between the host (man), the agent (SARS-cOV-2) and treatment provided. It is due to interplay of these intricate, unpredictable and independent factors that the ‘cytokine storm’ and ‘Disseminated Intravascular Coagulopathy’ that wreaks havoc in patients with severe infection and life-threatening bleeding associated with delivery respectively, still remain unconquered territory to men and women in the white coat. That is also why the abdomen continues to be ‘a pandora’s box’ to the surgeon. Why Pyrexia of Unknown Origin remains an enigma to the physician. Also, why subsequent delivery of a pregnant woman, whose first child was delivered by Caesarian Section remains a tight-rope walk for the obstetrician, as a dicey airway is to an anesthetist. That is also why Motor Neuron Disease remains a challenge to the neurologist, as overwhelming sepsis is to an intensivist.

Life inside the white coat therefore has always been unpredictable, high-strung, yet highly responsible. The delicate science of healing and its facilitation ought to have progressed hand-in-hand with longevity of the once, much-heralded and sacrosanct patient-doctor relationship. Doctors and other healthcare providers have been held with esteem and perched on a pedestal of respect. They were deemed God and angels. But something changed along the way. Patients and their dear and near do not hesitate to throw stones at the Gods and angels of yesterday. Blatant over-corporatization of healthcare, businessmen trespassing into sacrosanct temples of educating doctors,  nurses and paramedics, exorbitant bills that roll out of corporate hospitals’ billing machines, somnolent healthcare facilities and personnel in the public sector on which India’s not-so-well-healed depend, the doctor-pharma nexus, which ought to have been nipped, hostile press which prints and telecasts much-trumpeted and often unsubstantiated ‘medical negligence’, have all resulted in estrangement of healthcare dispensers from healthcare seekers in India. That is exactly why the neurosurgeon who died in Chennai after contracting COVID-19 while treating COVID-positive patients was denied a decent burial any human being deserves. His body was mutilated. The ambulance carrying the body was destroyed, and its staff stoned.

If not for his orthopedic colleague’s single-handed effort, the large-hearted doctor who sacrificed his life and his family’s health for the Corona- affected would not have been buried. That is also why healthcare workers on Corona duty in Indore were attacked by frenzied mob. That is why doctors treating Covid patients were driven out of their rented abodes by landlords in Bangalore, and police attacked doctors on emergency shift with batons in Bhopal, and why a shopper attacked a doctor in New Delhi. Healthcare providers, especially the ‘Corona Warriors’ have become India’s ‘new untouchables’. The very people who they served declared war on them. That is also why salaries and incentives healthcare workers, especially in corporate behemoths have been drawing have been slashed on the excuse of ‘fall in income due to Covid crisis’. In doing so, the corporate world lived up to its abominable avarice for big money.  Healthcare workers involved in treatment of COVID patients are disadvantaged by dearth of scientifically substantiated nitty-gritty about the virus, viz; re-infection, community spread, people testing positive for the virus well after its extended incubation period and beyond. These workers do not ask for respect, accolades, or national civilian awards. They only ask for an incident-free burial when they lose their lives, while saving others’. Don’t they deserve at least that? They certainly do. That is why the Modi government promulgated an ordinance to deal with those waging war against the ‘Corona warriors’, that seeks to award 6 months to seven years imprisonment, to levy fine of Rs 1-5 lakhs, and compensation amounting to twice the market value of property damaged, to render attacks on healthcare workers non-bailable and cognizable.

There’s no dearth of such ordinances and laws. Since 2007, 18 Indian states have passed such laws.  But their effective implementation has always been smothered by political influence and interference.  3 out of 4 doctors have suffered verbal or physical workplace abuse despite ordinances.  Can healthcare providers hope that the latest ordinance will be out-of-bounds for politicians? 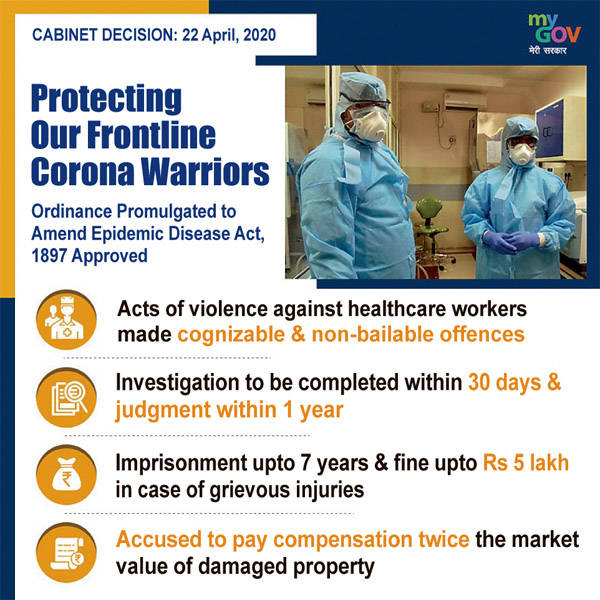