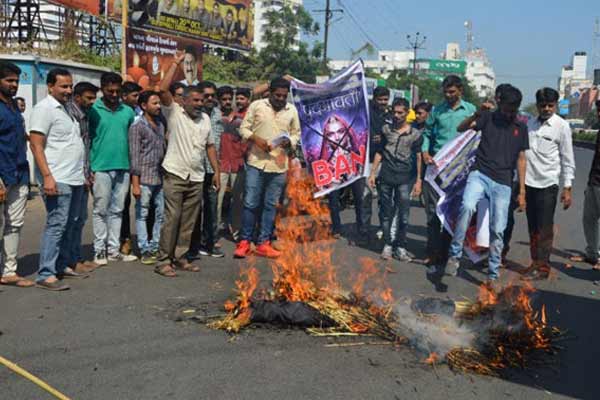 Padmavati is an Indian epic period drama film directed by Sanjay Leela Bhansali, based on the epic poem Padmavat (1540) by Malik Mohammed javasi. The film features Deepika Padukone in the title role as Rani Padmavati, alongside Shahid Kapoor as Maharawal  Ratan Singh and Ranveer Singh as Sultan Alauddin Khilji, with Aditi Rao hydari and jim Karbh in supporting roles. The film was scheduled for release on December 1 2017.

The film is based on the legend of Rani Padmini, a legendary Hindu Rajput queen, mentioned in Padmavat, an Avadhi language epic poem written by Sufi poet Malik Muhammad Jayasi in 1540. According to Padmavat, she was the wife of Ratan Sen (called Rawal Ratan Singh in later legends), the Rajput ruler of Mewar. In 1303, Alauddin Khilji, the Turko-Afghan ruler of the Delhi Sultanate, laid siege to the Chittor Fort in Rajputana. According to Padmavat, Khilji led the invasion motivated by his desire to capture the beautiful Rani Padmavati, who is said to have committed Jauhar (self immolation) along with all the other women of the city to protect their honor. The men of the city stormed out of the city in a final mortal sally to kill as many of the enemy before falling.

Padmini, also known as Padmavathi was a legendary 13th- 14th century Indian queen. The earliest source to mention her is Padmavat, an epic fictionalized poem written by Malik Muhammad Jayasi in 1540. The text , which features elements of fantasy, describes her story thus: Padmavati was an exceptionally beautiful princess of the Singhal kingdom(Sri Lanka). Ratan Sen, the Rajput ruler of Chittor heard about her beauty from a talking parrot named Hiraman. After an adventurous quest, he won her hand in marriage and brought her to Chittor. Alaudhin Khilji, the Muslim Sultan of Delhi also heard about her beauty, and laid siege to Chittor to obtain her. Many events occurred during the siege, till the Fort was finally taken. Meanwhile, Ratan Sen was killed in a duel with Devpal, the king of Kumbhalner, who was also enamored with Padmavati’s beauty. Before Khilji could capture Chittor, Padmavati and her companions committed Jauhar (self-immolation) to protect their honor. After her sacrifice, the Rajput men died fighting in the battlefield.

Several subsequent adaptations of the legend characterized her as a Hindu Rajput queen, who defended her honor against a Muslim invader. Over the years, she came to be seen as a historical figure, and appeared in several novels, plays, television serials and movies. However, while Khilji’s siege of Chitor in 1303 CE is a historical event, the legend of Padmavati has little historical evidence. Moreover, most modern historians have rejected its authenticity.

He was the second and the most powerful ruler of the khalji Dynasty of Delhi Sultanate. He was a nephew and a son-in-law of his predecessor jalaluddin, against whom he successfully revolted and killed to consolidate power in Delhi. Over the years, he successfully defended his kingdom against the Mongol invasions. His forces even ransacked the Mongol territories in present-day Afghanistan. Khilji subjugated the Hindu kingdoms of Gujarat (1304),Ranthambore(1301),Chittor(1303),Malwa(1305),Siwana(1308), and Jalore(1311).these victories ended several Hindu dynasties viz; Paramaras,Vaghelas,Chahamanas of Ranastambhapura and jalore.  A fact which must have fuelled the Hindu rightwing anger against the advances made by a ‘Hindu-basher’ like Khilji, to win the heart and love of the honorable Hindu queen Padmavati, who went to the extent to commit self-immolation to safeguard her honor and that of the other women of Chittor!

From the very beginning, this movie has been in the eye of a right-wing ‘cyclone’ that wrecked havoc to peace and public order in this nation. On January 27, 2017, an angry mob of Rajput Karni Sena workers, a far-right nationalist group, assaulted the film’s director Sanjay Leela Bhansali and vandalized the sets of the film during its shooting.

Why? Because they believed that in his movie, Bhansali attempted to ‘distort history’ with a dream sequence no less. This dream sequence supposedly features Rani Padmavati and Khilji being intimate.

On November 8, ten months after the assault and vandalism, Bhansali clarified that Padmavati has been made  keeping in mind ‘Rajput honor’, and that there was no ‘dream sequence’ in the movie, to quell rumors which landed the film in trouble in the first place, well ahead of its slated release on December 1 2017. All hell broke loose much before the release. Theatres screening the film were vandalized by marauding mobs. Arson reigned. Mobs ‘concerned’ about the Rajput honor that was allegedly dented by Bhansali through his film spearheaded mindless violence and conflagration that bestowed dishonor to India on a larger scale and perspective. Anarchy by right-wing forces and their stooges spilled to the streets, while the ruling BJP government in Rajasthan, which bore the brunt of anti-Padmavati’ extreme sentiments chose to look the other way.   To top it all, These rightwing goons threatened to chop off the nose of actress Deepika  Padukone who played the role of the queen who upheld her honor by committing self-immolation before an army advancing to capture her beauty. Director Bhansali also was threatened to have his head chopped off for outraging Rajput women’s honor by setting up a romantic sequence between the advancing khilji ‘in heat’, apparently advancing to capture the beautiful Padmavati. Thus a ‘chop chop culture’ came to be firmly engraved into Indian ethos, and even public life, and nobody cared- so it seemed. The BJP governments in Rajasthan and the centre, who apparently seem to ‘stand for Hindu sentiments’, whatever form that might take looked on as mute spectators. Their intentions were clear right throughout the controversy.

Interestingly, none of these protestors and their instigators had ever watched the movie. Not once. Not one! They acted on plain rumors and incitement to create unrest for short-term gains. The BJP in power in Delhi who saw red in political violence against its cadres in distant Kerala by leftist forces were unmoved by, and saw nothing wrong in the marauding mob that took the state of Rajasthan hostage in the name of some character that existed in the 15th or 14th century, and whose very existence is being question by many historians! After the fuss over the Taj Mahal and celebrations of Tipu Sultan’s birthday, the ‘history diggers’ that the BJP and it’s wreak less goons have famously become, saw another opportunity to further its ’mission rectify history’, which the party has decided with resolve to master, making itself  the laughing stock to this part of the world, and India!

Many BJP law makers and sympathizers lend credence to this fact by fanning the flames surrounding a mere film:

What is its fallout its intentions?

Where the mind is without fear and the head is held high
Where knowledge is free
Where the world has not been broken up into fragments
By narrow domestic walls
Where words come out from the depth of truth
Where tireless striving stretches its arms towards perfection
Where the clear stream of reason has not lost its way
Into the dreary desert sand of dead habit
Where the mind is led forward by thee
Into ever-widening thought and action
Into that heaven of freedom, my Father, let my country awake

Have been rendered a prayer in vain, and an empty jargon, sadly!