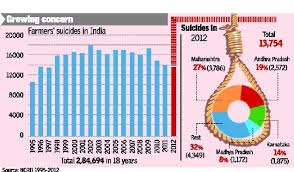 The Centre recently informed the Supreme Court that despite a multipronged approach to improve income and social security of farmers, over 12,000 farmers have been ending their lives  every year since 2013.

According to the statistics available with the National Crime Records Bureau of India (NCRB), 5,650 farmer suicides have been reported in 2014. The highest number of farmer suicides was recorded in 2004 when 18,241 farmers committed suicide.  Farmer suicide rate in India has ranged between 1.4 and 1.8/100,000 population over a ten year period through 2005. According to the NCRB, in 2012, 135,445 Indians committed suicide, of which 13,755(11.2%) were farmers. Of these, 5 out of 29 states accounted for 10,486(76%)-Maharashtra, Andhra Pradesh, Karnataka, and Kerala. In 2012, Maharashtra with 3, 786 famers’ suicide accounted for a quarter of farmer suicides in India.   The causes attributed to suicide among farmers are:

Farmer suicides almost became a daily routine in and around declaration of demonetization.

On November 22nd, 2016, a farmer in Telangana, unable to sell his land to repay outstanding debts killed himself and his family by adding pesticide into the family meal. Of the 144 recorded famer suicides post-demonetisation, over 40 were from outside the Cauvery delta region.  Tamil Nadu too witnessed her share of farmer suicide after demonetization, reported to be 17, according to the Chief Minister. Demonetization emerged the villain No.1 to throw spanner to the wheels of farmers’ wellbeing in India recently.

This has been an age-old scourge for which no effective treatment has been instituted for obvious reasons.

On June 1 of this year, farmers in Maharashtra went on strike for the first time ever. Angry farmers spilt milk and threw vegetables on the roads. Bandh was resorted to.

The agitation spread across many other states too like wild fire. Five people were killed in Mandsaur in Madhya Pradesh in police firing. Chief Minister of the state, Shivraj Singh Chouhan embarked on an indefinite fast to placate the farmers. Maharashtra too joined the loan waiver bandwagon.  Rajasthan is on the verge of calling a Bandh with the farmers not selling milk or vegetables an even boycotting public transport.

With Maharashtra also joining the arm loan waiver bandwagon, various state governments are expected to waive off $40 billion (Rs.2,57,000 crore), of farmers’ loan as a run-up to the 2019 general elections in the country, according to a global banking group. Farm loan waivers will amount to 2% of the GDP by the 2019 general elections, as other states are likely to follow the BJP’s governments in Maharashtra and UP, according to a Bank of America Merrill.

Wherever the farmers have been agitating, they’ve been demanding:

Geneticist Prof. Swaminathan, considered ‘father of Green Revolution’ had submitted its reports and recommendations in five installments from December 2004 to October 2006.  various recommendations put forth by the commission were: (a) to improve the quantity and quality of water available to farmers, (b) to enact land reforms like prevention of diversion of agricultural land and forests to corporate sector for nonagricultural purposes, (c) ensure grazing rights and seasonal access to forests to tribals and pastoralists (d) establish a National Land use Adversary service, (e) timely and adequate supply of credit by expanding the outreach of credit facilities system, (f) to issue Kissan Credit Cards to women farmers, (g) to establish an agriculture risk fund to provide relief to farmers in the aftermath of natural calamities, (h) to ensure availability of quality seed and other inputs at affordable costs, (i) fixing the Minimum Support Prices(MSP) for crops at least 50% more than the weighted average cost of production.

In the mean time, The BJP-led NDA at the centre chose to have the easy way out for a solution to famers’ suicides and agitations, such as those in Maharashtra and Madhya Pradesh recently- to waive off loans disbursed to farmers, instead of examining more viable and long-lasting measures like that of support prices for cash crops, which had to be raised at a war footing. Loan waiver which puts a huge yolk on individual states that choose to waive off loans is a populist measure that is extremely shortsighted and self-destructive in the long run. The Union Finance Minister minced no words in declaring that individual states will have to shoulder the burden of loan waiver, and that the centre is in no position economically to foot the bill. That had the states run helter-skelter for big money.

Take the case of Maharashtra as an example. The state is in a severe financial crunch. For 2017-2018, the estimated revenue deficit is likely to cross Rs. 4,000 crores. Excise revenue of the state has dropped by Rs.7,000 crores after the Supreme Court’s decision to ban liquor outlets beside highways. Implementation of the Seventh Pay Commission report for the state government employees will cost Rs. 31,000 crores. Ambitious infrastructure projects- the Mumbai-Nagpur superhighway (Rs.40, 000 crores), urban metro projects (over Rs. 1 lakh crore), and, to top it all, literally, the Shivaji statue off Mumbai’s coast (Rs.3, 800 crores) add to the bill. Against these expenditures, bridging over 31 lakh farmers back into the credit system would require another gargantuan Rs.30, 000 crores. Maharashtra is in trouble big time. It is highly unlikely that it would be able to waive off the farmers’ loans, as it has undertaken to, all by herself.

What about Uttar Pradesh? The state recently waived off Rs.36, 000 crores for 15 million farmers when Yogi Adityanath took over as Chief Minister to honor the poll manifesto on which the BJP rode to a spectacular victory. The UP government does not have the economic clout to bear this huge expenditure all by itself. It will need the centre’s munificence to meet its costly promise.

But in reality, it will be other states of the Indian Union which will be paying for UP government’s populist measure that helped its sweeping victory to the much-sought after seat of power.

How is that? The centre gets money in the form of taxes of various hues from the 36 states and Union Territories.

An average Maharastran pays Rs. 32,000/year as tax to the centre, while an average Gujarati and Tamilian pays about 20,000/year, while those in Uttar Pradesh, Madhya Pradesh,  Bihar and West Bengal pay only 6,000/year. The Centre, after getting these taxes keeps 58% to itself, while dispersing 42% to the states. For every Rs.100 an UP-ite pays to the Centre, he gets back Rs.200. A Bihari gets back Rs. 400, while a Tamilian gets back only Rs.34/Rs.100 paid to the centre. A Maharastran gets back only Rs.15/Rs.100. this arithmetic boils down to the fact that 4 states- Maharashtra, Gujarat, Tamil Nadu and Karnataka will bear the chunk of ‘nation building’, which means, it will be the other states which will be paying for mega loan waivers of others. Does it seem like a sure recipe that augurs for Indian federalism to the naïve? Far from it! It’s nothing but a slick Cunning to finance the NDA’s populist ‘magnanimity’ to capture power in all the Indian states ultimately. In other words- to rob Peter to pay Paul.

It is not the BJP government only which has resorted to farmers’ debt waiver with its eye on the ballot box. Other governments have waived off farmers’ loans, come election time, as this shortsighted policy is one among the favorite among vote-crazy politicians as a ‘vote poaching tool:

What if the government decides to waive off farmers’ loans? It will cost the nation Rs. 3 lakh crores, which is 2% of India’s GDP. The nation is undoubtedly reeling under a farm crisis. Waiving off farmers’ loan is only a quick fix solution and not a long-lasting approach. It was conveniently being used by political parties, of all hue and color, both at the centre and in the states for electoral gains, and has not served any good to ameliorate the lot of farmers in the long run. More than just the loan waiver, implementation of the Swaminathan Commission recommendation, especially that which called for fixing the ,minimum support prices(MSP) for crops at least 50% more than the weighted average cost of production would have relieved farmers’ economic travails in a more effective and long-lasting manner. The MSP was in fact incorporated into the BJP’s 2014 Lok Sabha elections manifesto. But, it has so far done best to remain just a manifesto, and a mirage for the farming community.

If Prime Minister Modi had really kept his promise to unearth and bring back black money to the nation, which according to the Director of the central Bureau of Investigation is slated to be US$500 billion in foreign tax havens (more than any other country), the farmers’ loan waiver could have been a cakewalk, without pinching the exchequer much. But, promises, unfortunately is a commodity to be made before the hustings and to be forgotten the very next day, win or lose, especially the former!