Inevitably, a girl decides to take ‘things’ in her hand! 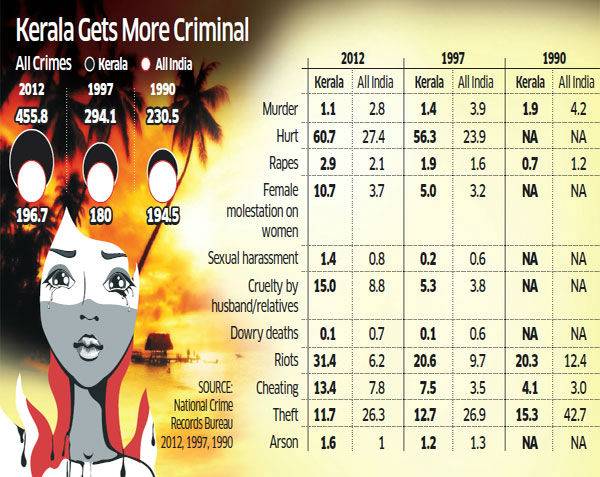 Kerala, known for many positives like a buoyant  health care delivery system, natural beauty, healthy Quality Of Life Index, communal amity, a peaceful society and high levels of literacy came to be christened ‘God’s own country’. However, one single smudge stood out to defy that title- that of rising incidence of harassment of women, irrespective of their age, by men, also irrespective of their age. Testosterone running through Malayali men’s veins seem to have them run amuck orgiastically, like sex-starved cannibals.

A total of 16,960 cases of crime against women and children, including 2,568 rapes have been reported in the last one year in Kerala, underlined by gruesome murders of the likes of Saumya, Jisha, and abduction and harassment  of a popular South Indian actress in a moving car on Kochi’s Highway 47, to name a few. According to the state police’s crime statistics, of the total rape cases, women were victims in 1,644 incidents while children in 924 reported cases across the state in 2016, compared to 1,263 and 720 in 2015 respectively. Of the total crimes against women and children, 14,061 were against women and 2,899 against children, it said. The number of cases registered under Protection of Children from Sexual Offences Act during the period was 2, 093, it reported.

The extent of atrocities on women in Kerala is surprising since the state has many positives to be proud of and exclusive, compared to other Indian states, as referred to above. In fact, women’s literacy is 92%, and the sex ratio is a healthy 966, but, none of these has translated into more progressive attitudes towards women paradoxically. To the contrary, things have only got worse. From 2005-2014, incidents of rape grew by an astounding 436%, assaults on women by 246% and sexual harassment by 980%, placing Kerala among the worst in rankings among Indian states with respect to crime against women. There are 63 crimes against women per lakh population, as opposed to the national average of 46.3, with the neighboring Tamil Nadu registering 18.4.

What made things most appalling is the involvement of priests, tantris and mullahs in these crimes, making Churches, temples and mosques unsafe for women and children (belonging to both genders) in the supposedly ‘God’s own country.’

What caused Kerala to earn this dubious distinction?

Whatever the cause might be, the state and its law-enforcing apparatus seem to have given up on tackling this menace effectively. Crime against women almost has reached a state where it is being taken for granted.

But one girl dared to be her own savior from a predator recently. She decided, daringly to take ‘things’ into her hands (pun intended), to protect herself. A 23-year old law student liberated herself from the clutches of a self-styled ‘God-man’ belonging to an ashram near the capital city, at whose hands the girl was being repeatedly violated for seven long years. According to the police, the ordeal of the girl began when the ‘God man’ befriended her family when they visited the Ashram years ago. The bond between him and the girl’s family grew stronger when the former visited the capital to participate in an agitation. Soon, the ‘God man’ found himself visiting the girl’s house regularly to perform rituals to cure her father, bedridden from paralysis. There are also charges that the girl was being molested by the ‘God man’ with the connivance of her mother, which is being investigated into. The other day, the Swamiji arrived at the girl’s house to perform the ‘rituals’ as usual, and attempted to rape her at around 11 pm. At this instance, the girl decided to resist his ‘rituals’. He threatened her with a knife. In the ensuing scuffle, the girl took hold of the knife and cut off the penis of the ‘God man’ who had been molesting her for the past seven years. An Inevitable fallout, very similar to the climax of the Mollywood blockbuster ’22 Female Kottayam’!

The entire state applauded the brave girl for ‘bobbiting’ her habitual assailant. Even the Chief Minister congratulated the brave heart!

Years ago, a frustrated housewife in Virginia,USA, whose surname was Bobbitt, grabbed a kitchen knife and sliced off her drunken husband’s penis, in the process, turning the name Bobbitt into a verb!

Going by the rate at which women are being molested in Kerala, and likelihood of many more bobbitting in self-defense to follow, Kerala could be birthplace to many such verbs, with women walking around with knives!

Was the girl right in doing what she did? Of course she was. It was entirely her right to self-defend.

A harassed state even went to the extent to exhort women (through trolls in the social media) to carry kitchen knives with them to be used whenever situations warranted it!

While the ‘God man’ is recuperating in hospital from surgery to have his badly punished organ restored, the victim of his advances is being sheltered in safety under police protection.

The incident had some people debating on the appropriateness of the Chief Minister himself complimenting the girl for having bobbittised her molester. It could be argued that by doing so, the Chief Minister accepted failure of the state’s law-enforcing agencies to protect its women and girl children, rather the deficiency of alacritous policing by such agencies itself. He seems to have given a free hand to citizens, especially women to protect themselves with knives or other convenient methods, and rightly so, under the circumstances. Right-thinking people argue that if two or three more women repeat the bobbiting act, the testosterone surge and it’s ravishing effects in Kerala could be nipped, and sanity restored. But would anarchy result? As if things are not anarchic enough these days in ‘God’s own Country’!